I am excited to say that “Regina Cemetery Tours – The Game” launched to the public exactly one year ago today, on August 27, 2019.

The game launched in the backroom of the Queen City Collective and was filled with over 30 people from various parts of the Regina gaming community. This included people from the Regina Game Dev, Massive Corp., Sask Interactive and even gaming influencers such as Dylan Fairman.

The launch went well, and then it was then turned loose upon the world. There were a few issues that needed to be addressed following the launch, with one of them being the famous “Stephen” Bug. To this day I am not happy with that fix, but it appears to work the majority of the time — and most people don’t finish the game anyway to experience it.

Since that fateful day in August, a few things have changed in the game. I thought the anniversary of the launch would be a great time to discuss them.

I launched the game in late summer, so quickly autumn swooped in. We had to change the game from its iconic green to a dusty brown and orange. A few months later, I had to change it again, this time to icy white and blue for winter. These seasonal changes also brought in some of the most loved additions to the game — pumpkins in the autumn, snowmen in the winter and flower pots in the spring and summer. These extra additions make the game a little more fun to play for repeat visitors.

Winter also brought a need to reskin our characters. It was no longer acceptable to wear shorts and t-shirts. All of our characters got new mits, touqes, jackets and pants to stay warm during the cold winter months.

One of the most iconic parts of “Regina Cemetery Tours – The Game” are the ghosts. These ghosts are user-generated. As the player plays the game, the system tracks their movements, saves it on the server and then brings that — and additional user data — back into the game to make ghosts. I discovered very quickly that the database uses for ghost data fills up, so I capped it at 5,000 ghosts that delete and repopulate as users play the game. By doing this, we still would have a wide variety of ever populating ghosts, but not have too many that the server would slow down. 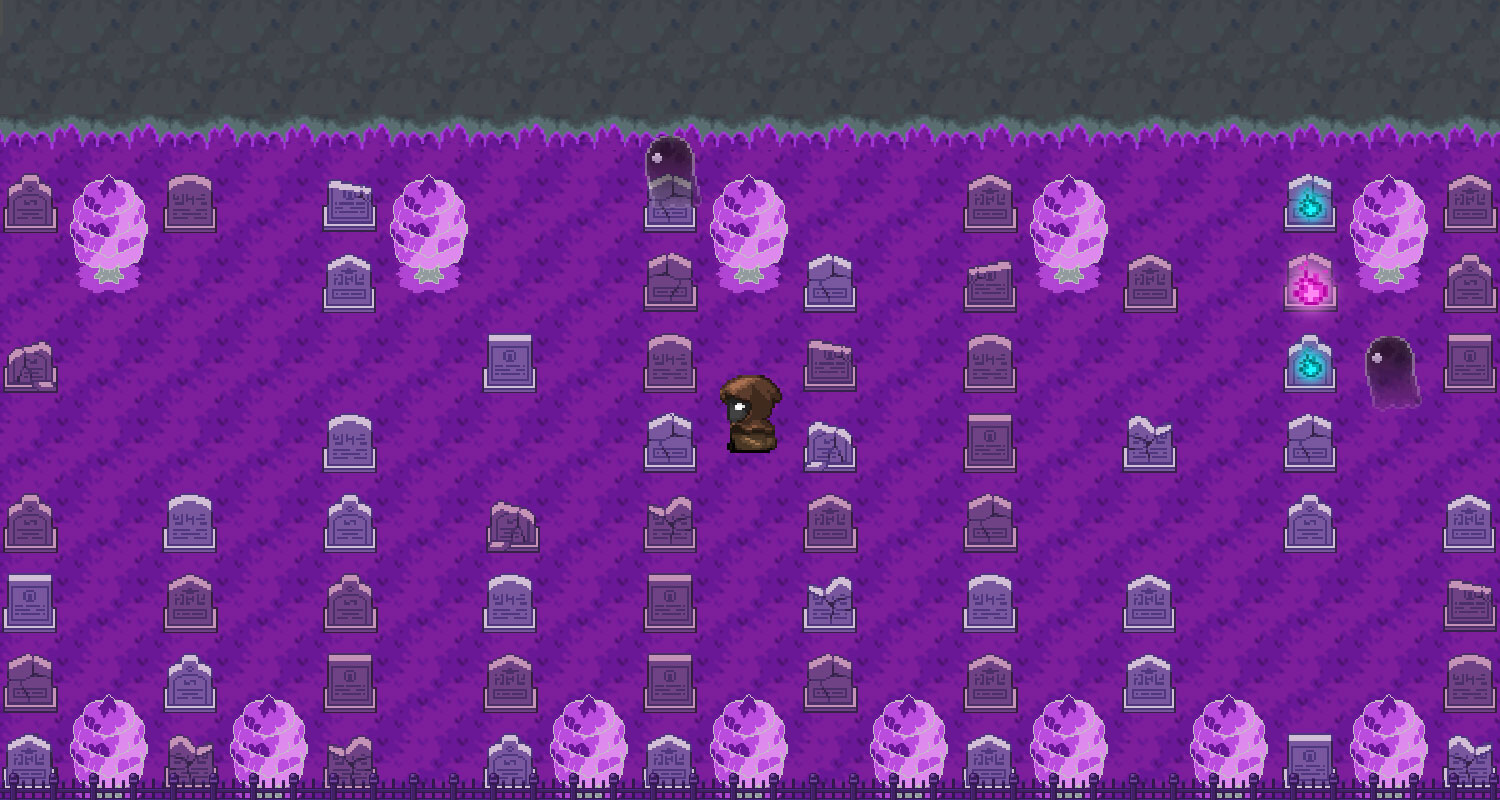 One of the things I struggled with when making the game was the vast amount of content needed. I pulled various sources together to make the content for the game, and had spent many long nights editing it. Still, spelling mistakes slipped through and I am constantly going through and making tweaks to it.

I also added the ability to die in the game, something that wasn’t in the original launched version. Instead, users would just get “soft locked” into the game after losing all the flames and not being able to collect anymore. I buffed a certain “Easter Egg” in the game to get around this issue but noticed it was still happening so I just made a way to lose the game instead.

I also recently changed the intro of the game. Originally it had some verbatim about how the City of Regina Parks and Cemeteries Department doesn’t support the game. While this is still true, I felt this tarnished an otherwise fun and educational game. Instead, it now reads: “This game is inspired by real people and real stories. May they forever rest in peace.” which I feel is appropriate and less political.

Also, in January the game would receive an Honourable Mention by Awwwards, a prestigious site that “[recognizes and promotes] the talent and effort of the best developers, designers and web agencies in the world”.

I get a lot of requests from people, both historians, tourists, teachers, taphophiles and curious folks to do cemetery tours. I wanted to do these tours and appeared to the city to allow them, offering 100% of the proceeds back to repair the cemetery. Instead, they chose to consider a non-profit organization that was using my tour to generate funds. Understandably, this resulted in the threat of legal action.

This was all put on hiatus in March 2020 when the COVID-19 pandemic hit as all tours were officially cancelled for the season.

As the months have gone on and the world has begun to “open up” again, I began to get asked to do tours again. There are some valid claims to why these tours should be allowed. First, outdoor gatherings of small groups were deemed safe by both the Government of Saskatchewan and the Government of Canada. Secondly, it was discovered UV kills the virus. Thirdly, public spaces like pools have opened up, and schools will be opening up too. To quote a letter from the First Baptist Church during the Spanish Influenza pandemic of 1918 to the City of Regina, a cemetery, which is “a well-lit, well-aired space occupied for a short time once or twice a week is not the same source of danger as an ill-lighted, ill-ventilated building, occupied continuously for several hours daily by a constantly changing audience”.

(They were talking about churches vs stores in that letter, but the same can be said in this case. No offence to schools though. School is cool.)

As expected, my protests have been for naught and the physical walking tours of the cemetery are still forbidden.

With a virtual tour of the cemetery being the best way to share the history of the city going forward, I plan to make some changes to the game. The first is to try and get the game into classrooms, or at least into curriculums. A lot of teachers and parents are looking to teach their children virtually so a game about history is the perfect mix of fun and education. It would also help students otherwise appreciate the city more, and keep history alive. Sadly, very little if any Regina history is taught in schools. This would be a great opportunity to change that.

Also, in a perfect world where I have the time and resources to put towards this game, I would like to rebuild the mechanics of it and then maybe relaunch it on other platforms. One of the struggles the game has is processing collisions. As people play the game long and longer, it exponentially slows down as it has to process hundreds of collision checks every second. I can recode much of the site to run smoother and faster, but it will take a lot of time.

Oh, and I plan to update the flower pots too. I hate them.

With all that said, the first year of “Regina Cemetery Tours – The Game” has been a success. In the past year, almost 5,200 unique visitors played the game nearly 10,000 times. For a free game that I don’t promote very often, that’s fantastic.

So, thank you everybody for a fantastic year. There have been some ups and downs this past year, but history is still being shared, stories are being told and the secrets are still being discovered.

Tip for the game: count the dog’s barks.