Just over a century ago, Regina was hit by the deadly Spanish Influenza pandemic. The virus swept the world in the final months of the Great War and knocked on the doors of Saskatchewan on October 1st, 1918. Five days later Regina had had her first fatality. 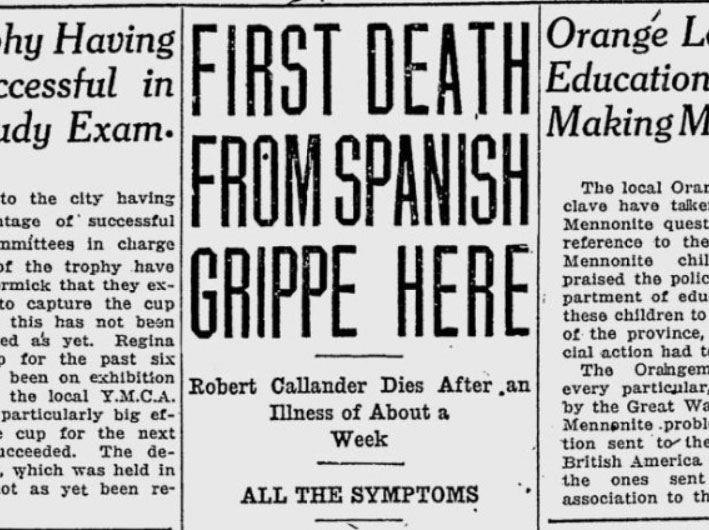 By the time the war ended just over a month later, over 2,000 people were sick and over 230 people had died. When the pandemic’s third wave came to an end in 1920, that number had increased to 330. In less than a month the city was paralyzed. Schools were closed, churches were closed, shopping hours were restricted, the streets were empty and people lived in quarantine. They believed the virus travelled in invisible miasmic clouds. If you breathed in the infected air, you would get sick. People chose to hammer and paint their windows closed, trapping themselves inside.

In many ways, the Spanish Influenza pandemic of 1918 mirrors the COVID-19 pandemic of 2020. Businesses are forced to close their doors, schools and churches are shut down and people are told to stay inside — although for a different, yet equally effective reason.

However, these restrictions happened a lot faster than they did in 1918. This isn’t because the virus is more deadly — it isn’t — but because we understand how it spreads. Had Regina gone into quarantine sooner in 1918, the number of people that died would have been much lower. 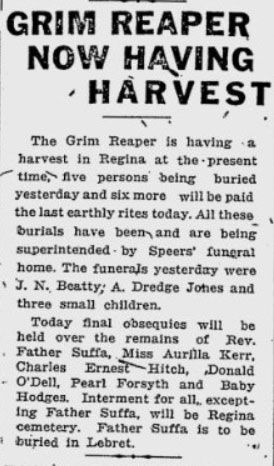 At the time, Regina had no idea how to handle this situation. They sought guidance from anybody, telegramming cities in Ontario on what to do, and even inviting the mayor of Saskatoon down for advice. It was only after the other cities began shutting down doors and banning assemblies that Regina did it too.

The Spanish Influenza was a dark stain on Regina’s history, one that is frustratingly poorly documented. But it is often an asterisk in Saskatchewan’s history books, or at best, a short paragraph. Many skip it over completely, going from the Great War straight into the Roaring Twenties. But it is studying these six weeks that can give us lessons on what to do next.

Don’t Expect the Government to Save You

The government failed us in 1918. The federal government did nothing to help, but then again they didn’t have a hand in everyday affairs until the Great Depression. The provincial government had some sway, declaring laws on assemblies and on travel, but it is impossible to police an entire province. Towns and railway stations went into lockdown, and the moment the RNWMP opened one community up, another closed instead. All along the railroad, stations were closed and travellers were not welcome. In many ways, the provincial government made the situation more difficult for rural citizens, at one point referring to farmers as “inmates” in their own houses:

“Instances have been reported from many points in Saskatchewan of homes where the inmates have been down with influenza for days before their neighbours called, and in some cases death has taken place days before the fact became known.”

On a municipal level, the government was much more active — but not always helpful. The city would close theatres, pushing nearly a hundred people into unemployment overnight, with no plan for compensation. They shuttered schools and asked teachers to work as nurses, yet also refused to pay them their salary. (They would later change their minds on this.) They also closed churches but offered no way for people to find solace. But they didn’t close stores, and they didn’t limit the number of people that could be in a store. This lead to complaints from church, especially First Baptist, who wrote the following in a letter to the city:

“[A] well-lighted, well-aired building occupied for a short time once or twice a week is not the same source of danger as an ill-lighted, ill-ventilated building, occupied continuously for several hours daily by constantly changing audience.”

The government’s biggest blunder came out of selfless fear. They established the Spanish Influenza Relief Committee, who had the purpose of notifying the public, preventing outbreaks, isolating patients, quarantining breakouts, place carding houses (visibly marking houses with somebody sick inside so others know to stay away), and disinfecting hospitals. To them, they were the only force preventing absolute anarchy. Their entitlement came to a conclusion when the then-mayor of the city, Henry Black, came down with the flu.

The moment a “vaccine” came to the city, the committee consumed every vial of it. However, this vaccine did nothing, as they had no way of making viral vaccines yet. Instead of giving the vaccine to the teachers, the nurses, the doctors or the Boy Scouts, the committee chose to take it themselves — ultimately doing nothing other than sewing division when the city needed unity. 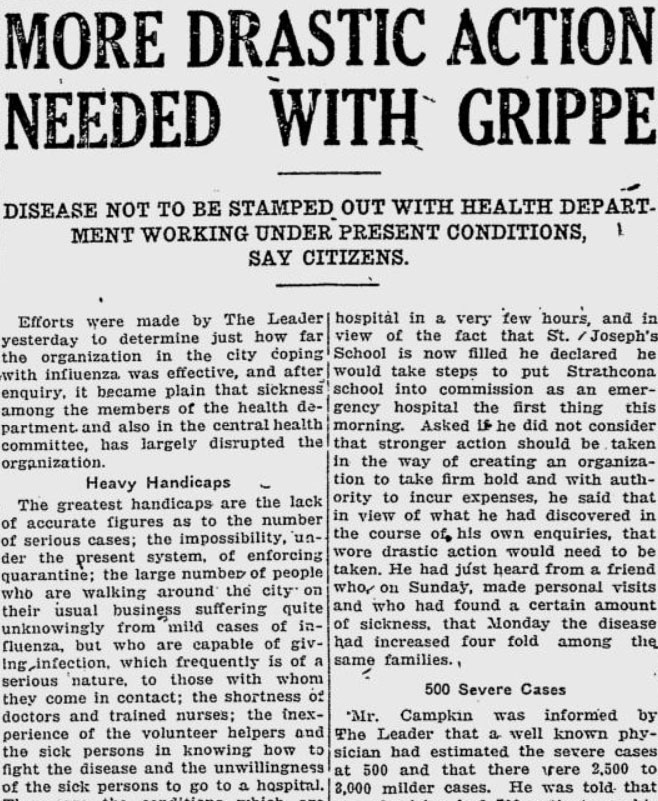 During the Great War, people were told to ration food, supplies and water. Everything was needed to go overseas. It was then decided without any discussion that during the pandemic, food and supplies should be rationed again. With transportation lines shut down across the country, people couldn’t rely on a constant supply of food. 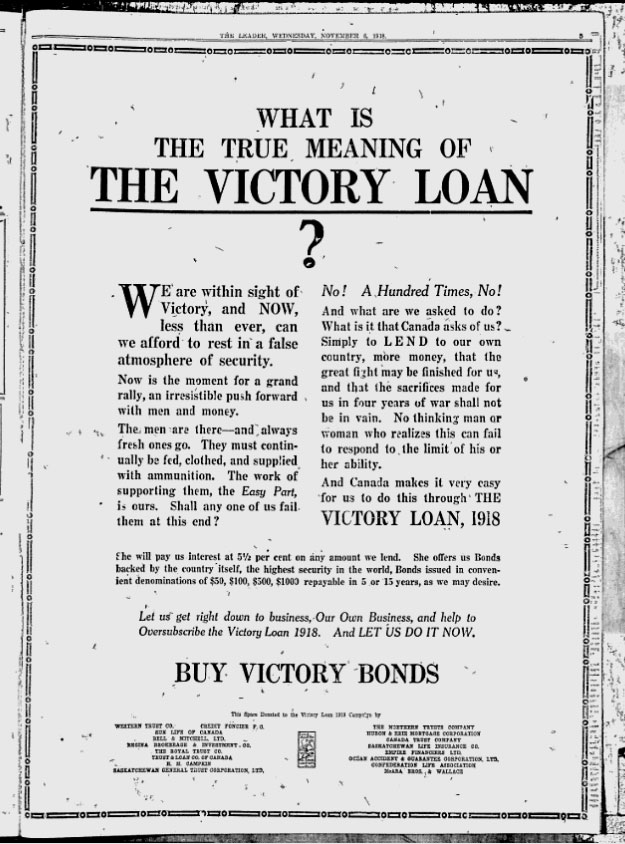 In “normal times”, Canadians throw out 33% of all their food. While this is very wasteful, it isn’t a problem for most people. We have a proper supply chain of food coming into cities and towns. During a pandemic like this, those supply chains are strained. Walk around any supermarket and you’ll see empty shelves where meat, bread, milk and toilet paper once sat. Stores have to limit these items to one per customer. This is no different than war-time rationing. What you won’t eat, somebody else would gladly have.

We need to keep in mind that people are making goods now, and supply trucks are coming, but we have to expect these things to take time. The best thing you can do is cut down on the amount of food you’re wasting and find alternatives for it. Did you make too much rice? Make a rice pudding. Do you have scraps of chicken? Boil it and make a soup. Make food last longer because it’ll take longer for more of it to come in.

The people running the public health system are swamped on a good day. In crisis situations like this, they’re at war. They need to mobilize doctors and nurses, protect patients and lower the spread of the virus. At the same time, they also have to keep people calm. A lot happens behind the scenes that the public isn’t told about. During the 2009 Swine Flu epidemic, there was talk about making Evraz Place into an overflow hospital. That same conversation is probably happening again. 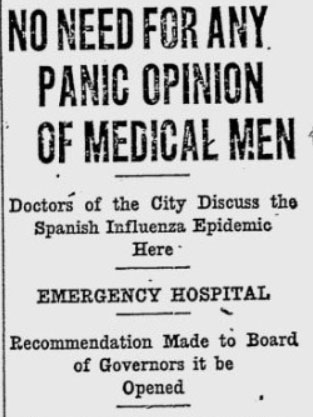 In 1918 the public health authority, led by Dr. Maurice Seymour, the Provincial Health Commissioner, told farmers that the safest place they could be is on their farms. This would not only protect them but also prevent an influx of people rushing into towns that didn’t have the medical capacity to handle them. The farmers didn’t listen and instead surged into smaller communities, only to be pushed back as they went into quarantine. Dr. Seymour told communities not to quarantine people out, but Weyburn decided against it, with The Weyburn Review writing:

“It is poor encouragement to local physicians who are doing all within their power to stay the progress of the disease, to find their work largely ineffectual because a department assumes the powers of an autocracy.”

Weyburn chose to lock the city down, and in turn, had a death rate of 8.7 per 1,000 people, significantly higher than the 6.4 rate of the rest of the province.

It is also important not to fall for the “quackery” cures that will appear during a pandemic. This happened in 1918, with cures as far-reaching as using eucalyptus oil to help fight it, as well as certain fabrics that were claimed to act as a repellant. None of this worked, and neither do the “cures” you might hear on social media. Follow the advice of your public health authorities. Eat healthily, drink fluids, get rest and avoid crowds. 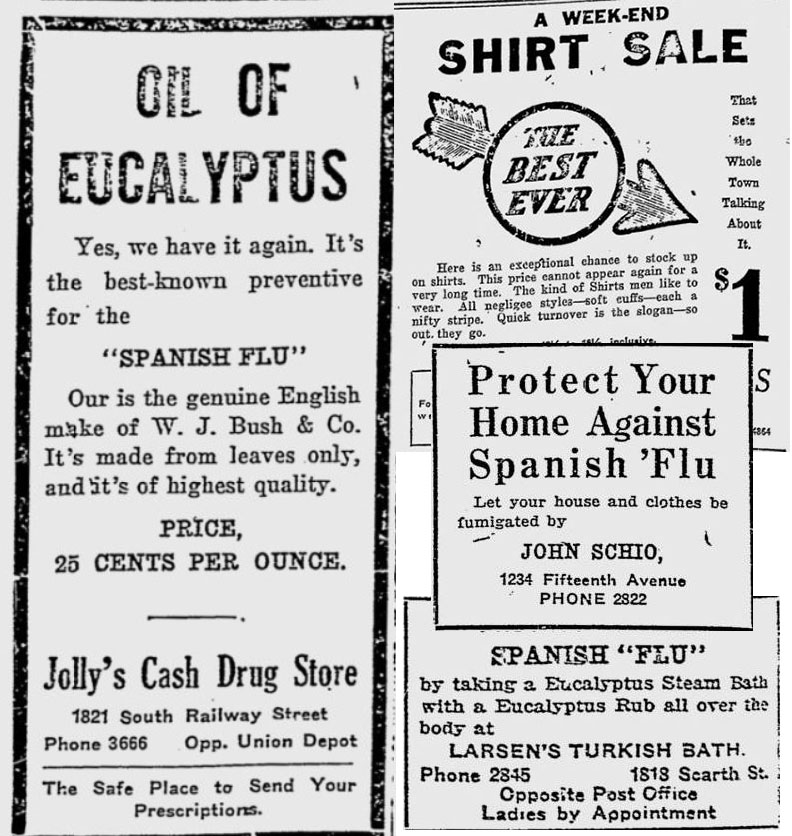 Expect The Numbers to Climb

Right now there are 44 cases (as of March 22) of COVID-19 in Saskatchewan. Other provinces have hundreds of cases. This number is going to climb, and so will the number of people dying. This number is bound to go higher and higher, with more and more people being infected and being tested. In 1918 the city was unable to keep track of these numbers, as there were too many patients and not enough doctors. One doctor even said on October 28, only three weeks after the first death:

“If the devil and all his angels were behind me, I could never reach all these people tonight.”

As the situation gets worse, numbers will go up, go down and change. This is normal, as reporting numbers become less and less important. In late October there was no number of how many people were sick. The doctor quoted above speculated there were around 5,000 cases in the city. That number instead was around 2,000. Try not to focus on the numbers. You know they’re just going to get worse.

Connect With Others The Best You Can

You’re not alone during this. We are all going through the same thing. It is important to help others, to be kind to others and to communicate with others. During the 1918 pandemic census, it was discovered one family had run out of wood and was keeping warm by burning money. Neighbours came together and got that family some wood.  Another family needed help administering medicine to their children because only the child’s surname was on the bottles and they didn’t know who got what.  People volunteered at the schools, volunteered with public education and to help with the census. It was the volunteers that saved this city. If somebody lost their job, neighbours chipped in and gave them money and food. They helped each other out, which is what we need to do this time, too.

If you don’t feel comfortable volunteering or helping, the best thing you can do is stay inside if you are sick or healthy. Do whatever you can to “flatten the curve”. 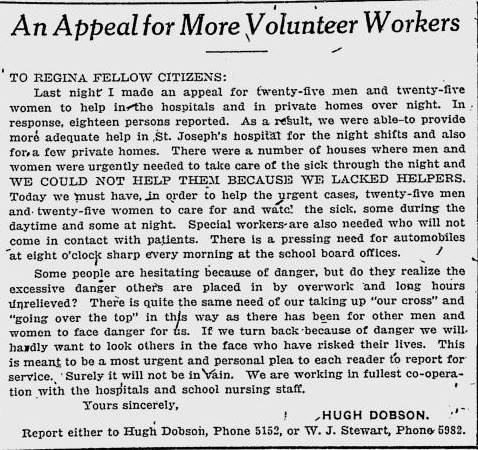 Know That Things Will Improve

When the Spanish Influenza pandemic occurred, many believed it was the “End Days”. “The war had come home”, many said. But the city, the province, the country, the economy, the jobs and the livelihood all recovered. Few people had ever heard of the Spanish Influenza prior to 2018, the 100th anniversary of it, and even today newspapers are printing stories of it like it’s a new thing. The story of the Spanish Influenza is a century old, and one that many have forgotten. What you’re going through now will pass much as it did before. Use this time to do the things you love, and to plan for life afterwards. One day this will be all over and you will have a choice to live as before or to live your life anew. Many people started new lives after the Spanish Influenza. It’s a good time to prepare for that too. 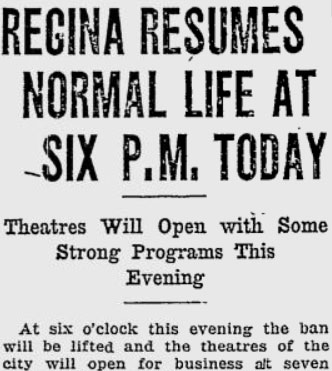