When I first organized my tour of the Regina Cemetery in 2016, I would have never expected it would become such a popular, controversial idea. Almost every other major municipal in Canada has cemetery tours, from Victoria to Edmonton to  Winnipeg to Montreal. Some cities even have multiple tours because they have so many cemeteries, like Philadelphia or New Orleans. They aren’t uncommon in Saskatchewan either, with both Moose Jaw and Yorkton having these tours. I was even told by a former mayor of Regina that the first thing he does when visiting a new city is going on a tour of the cemetery. While cemetery tours are a little strange, it certainly isn’t unheard of.

But I also understand why some people might not like them. Stomping around a place of rest to make money is somewhat sacrilegious. It doesn’t feel right to profit off the stories of the dead. That’s why when I decided to start my tours of the cemetery, I wanted all the money to go towards funding the 1918 – 1920 Spanish Influenza monument. I did the tours to make zero profit off them, and that stays true to this day.

But this changed in 2017. After doing my first tour, the City of Regina said I needed insurance to do future tours. This seemed reasonable, so I partnered with Heritage Regina to piggyback off their insurance. In exchange, I was asked to join their board.

Although I had wanted all the proceeds from the tours to go to the monument, I think that goal was lost somewhere along the way. Instead, Heritage Regina collected the funds and used it for their own projects. Although this is normal for all of Heritage Regina’s walking tours, it put me in a financial bind for the monument. Heritage Regina would later alleviate that bind by donating $200 towards the monument and later would donate another $800 to cover the taxes. 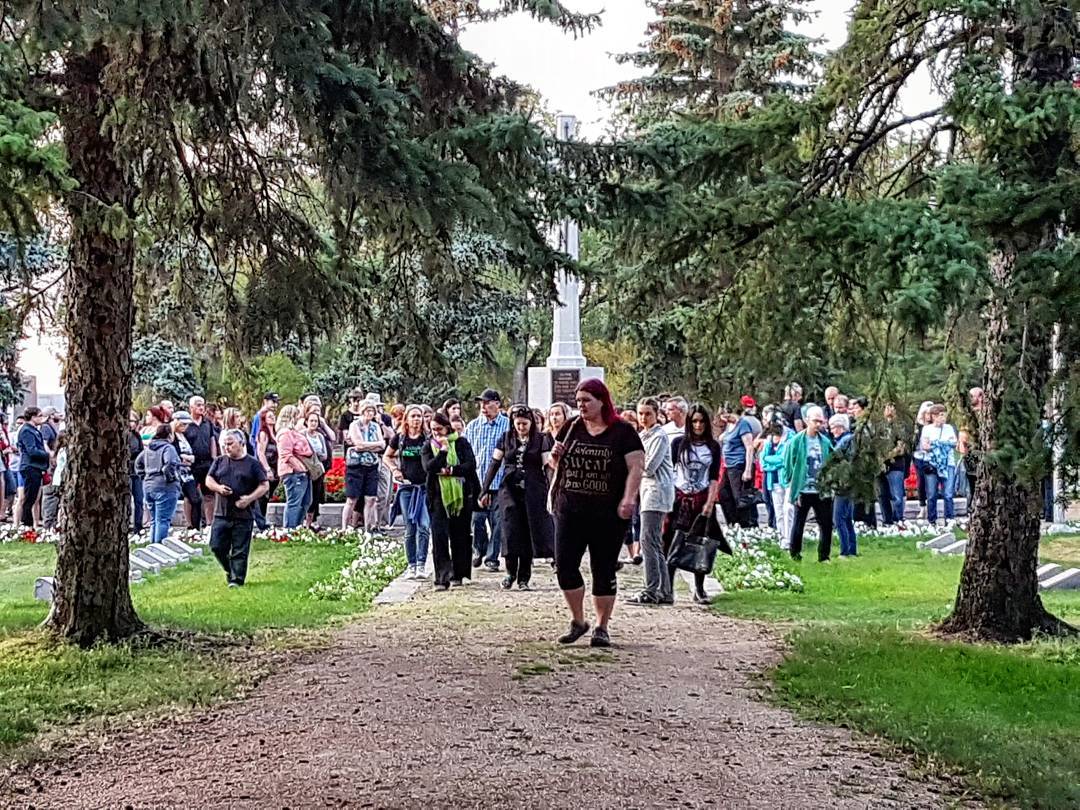 Between 2017 and 2018 there was a lot of discussion about the tours. I wanted to add more stories, change up the route, explore more sides of Regina’s history and answer a lot of questions previous visitors had. However, the City of Regina wanted the tour to be smaller. They wanted fewer stops, fewer stories and less time in the cemetery. They also censored several stories, removing some important ones completely, such as the story of Nicklas Schaack, a Regina Riot victim who died via complications from his time in police custody. In fact, the city physically had me walk the grounds with city staff to verify the route. Even after they approved the stories and the spots, they would continue to censor them in the following months.

In 2018 the tours were another huge success, and over a thousand dollars of donations came in. I would have preferred the money to go towards maintaining the cemetery since its condition is worse than when it was vandalized in 2011. But, instead, the money went to Heritage Regina.

At the beginning of 2019, I gave Heritage Regina my notice that I was leaving the board. It was a volunteer position and I couldn’t justify volunteering 20 hours a week while being self-employed. But I did offer to continue running their social media and email campaigns, I offered to stay on until the Winter Lecture Series had ended and I offered to continue the cemetery tours.

Instead, I was dismissed a week early, my offer to run their social media was turned down and the cemetery tours went on hiatus. 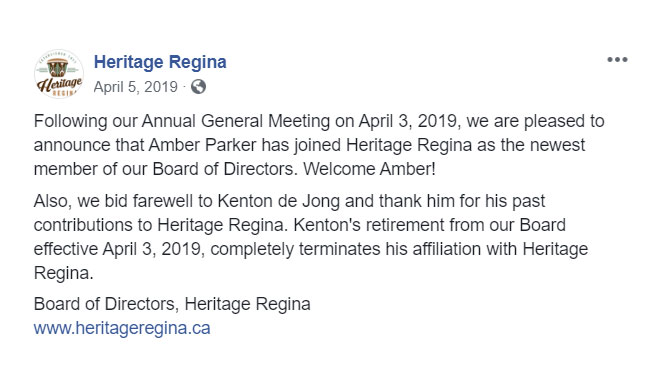 So, I began discussions with the city to do my own cemetery tours. If the original concern was insurance, I could get insurance. I had the city send me a bullet point list of everything I needed to do to organize my own tours. This included registering a formal business, getting the proper paperwork, getting insurance, giving them proper notice of events, etc. It took a while, but as I was nearing the completion of the list, I requested a form from the city to give to insurance companies to get the correct insurance. This was their very generic event request form, but it was a form I needed to actually call the city to get a copy of. They said they would email me the form, and instead, I was sent an email telling me that my request for the form was denied.

I was informed then by the City of Regina that only Heritage Regina could do historical tours of the cemetery. I replied that I didn’t understand. Heritage Regina wasn’t actively pursuing tours in 2019. How can they be the only ones allowed to do something, if they have no interest in doing them? The city wouldn’t answer that, and instead said all future tours were under evaluation.

They would also say that that I would not be allowed to take friends on tours of the cemetery, something I asked them to clarify and they kind of double-downed on. 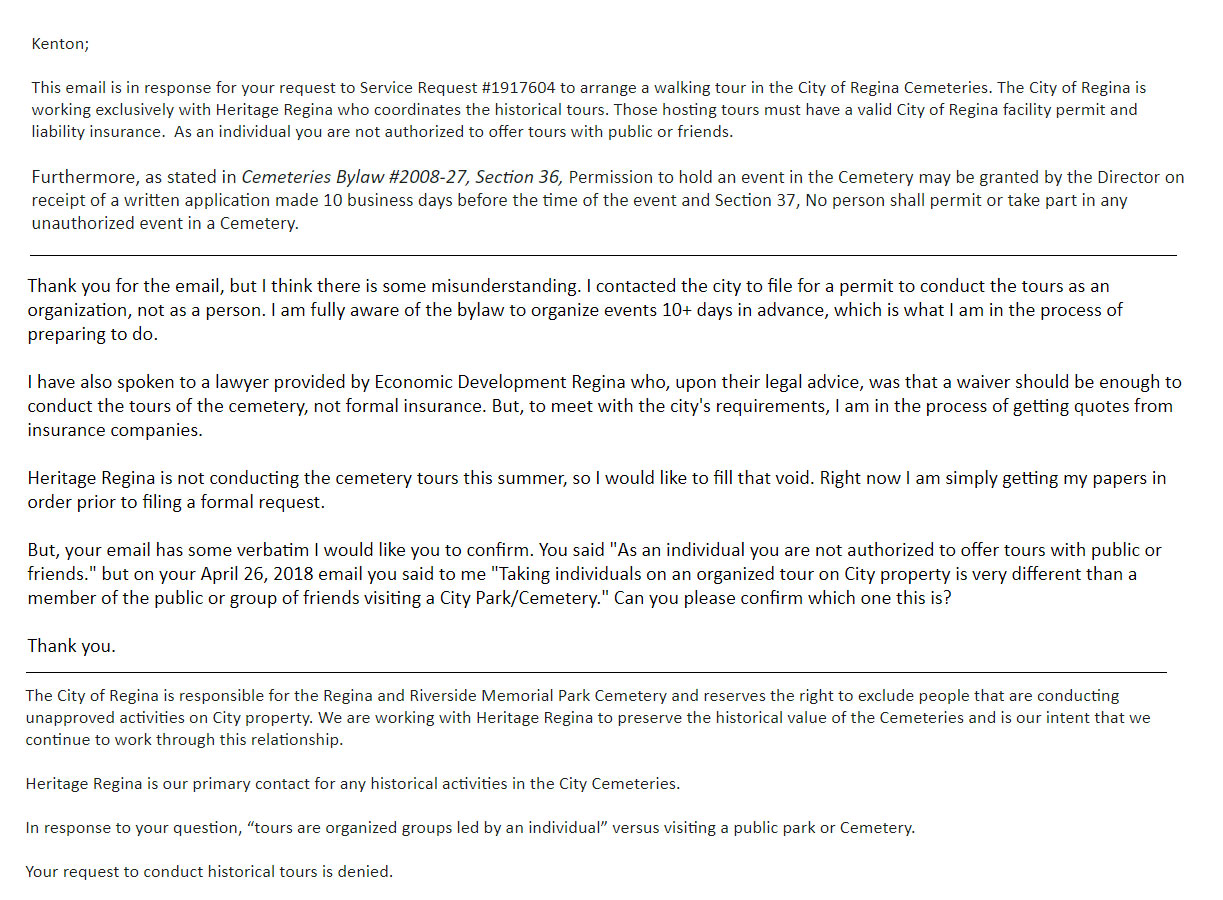 I felt this was extreme. I wasn’t asking for anything outrageous, like themed cemetery tours that other cities have, or mock trials or vignette or moonlight tours. I was asking to organize regular, respectful tours during regular hours. I had done everything up to that point that they had requested.

After this, I decided an actual verbal conversation was needed. I emailed the Manager of Parks and Open Space Services and asked if we could sit down and discuss the tours going into 2020.

I waited a month for a reply and heard nothing.

I emailed him again.

I then wrote a version of this article and then deleted it. I then wrote another and had my friends read it. One of them told me that before I put this online, I should talk to a City Councillor. So, I called up Andrew Stephens of Ward 3 and told him what was going on. He told me to put it in an email and he’ll see what he could do.

A week later, after two months of silence, the Manager of Parks and Open Space Services emailed me back. His reply was the same bureaucratic verbatim they’ve been telling me for a year. I replied back that his answer was not satisfactory as it didn’t answer any of my questions. Why wasn’t I allowed to do tours that I had operated the past two years? I laid out my plans for ticketed events with proper crowd control (two things the city asked Heritage Regina to do, and they didn’t fulfil ) and clarified that I wanted all the money from the tours to go towards the cemetery maintenance. Naturally, I didn’t get a reply.

But the manager did drop a clue about what was going on with the tours. He said it was under his impression that all donations from Heritage Regina’s cemetery walking tours would go towards maintaining the cemetery.

This surprised me. Was Heritage Regina was pursuing tours of the cemetery without me? To my knowledge, they had been in operation for 39 years and never done tours of the cemetery until I joined the board. The tour I was offering was a collection of stories from various sources. It was a custom tour of stories I personally handpicked. It would be no different than taking away the McNab Neighbourhood tour away from Government House or taking away the Wascana Lake tour or the Germantown tour from their tour guides. This was very upsetting because it implied Heritage Regina would take over any tour if they no longer got along with the tour guide. I inquired to Heritage Regina about the tours and they simply replied: “Thanks for asking, we’ll do our media when we are closer to our launch date.”

It was at this point I was exhausted. This is a free cemetery tour. Why is it so difficult to get a straight answer out of the city, or have open dialogue with Heritage Regina? For a year I was running in circles emailing people, creating a business, spending money, talking to insurance companies and doing everything they told me to do, only for the door to be closed in my face.

So, on January 31st, 2020 I sent the following letter to Heritage Regina. In it, I told them the same thing I told the City of Regina. Proceeding to do these tours is a blatant infringement of my intelligential property, but if they insist on doing them, all I ask is that every dollar from the cemetery tours to go back towards the cemetery. If they must do my tour, then at least put the money where I wanted it to go.

I also informed the City of Regina that if Heritage Regina does not do the tours, or if they do the tours and they do not donate every dollar back towards the cemetery, I will do the tours my own way. And this, I clarified, will be an open violation of Bylaw No. 2008-27 and will open me up to a $2,000 per infraction violation or 90 days in jail. I told them that if they want to enforce that bylaw and charge me for tours in which I am donating the profits from, they are welcome to.

I don’t know what’s going to happen to the cemetery tours, and I don’t know why this is such a problem. I would love for the tours to continue. Right now, I am waiting to see what Heritage Regina does. It would be great if they talked to me about the tours and we found some kind of resolution, but I have a feeling that isn’t going to happen.